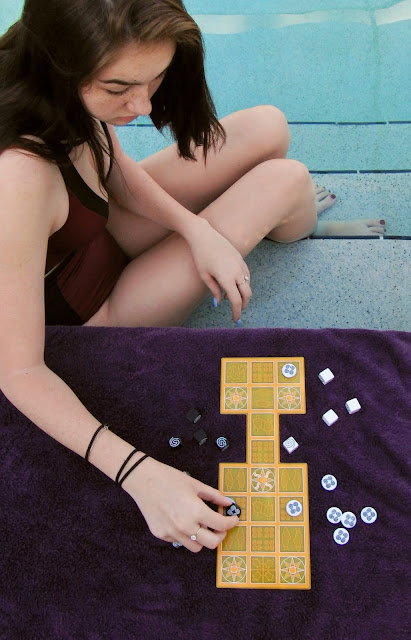 The ancient game known as the Royal Game of Ur originated over four thousand years ago in Mesopotamia. An inlaid wooden game board with dice and stones was discovered in a royal tomb in Ur by Sir Leonard Woolley, archeologist from the British Museum. Rather than copy the original artifact I made up new designs to decorate the twenty squares. I based them on Sumerian artifacts dedicated to Enki, God of Water, and Utu, God of the Sun. The board is decorated with stars, fish, swirls, turtles, and mountain goats. The center star is the sun. I call this version WatUR.

Two players race their stones around a path on the board to try to finish first. You can bump the other player’s stones from the board if you land on their square. Stars are lucky. You get another turn if you land on a star. You’re also safe on stars and can’t be bumped off.

When one player gets ahead by moving stones off the board, the other player gains an advantage by having more stones to use to bump their opponent. Often the game is so close that both players are rolling two, three, four times, waiting for the exact right roll to bear off their last stone and win the game.

Instead of a bulky cardboard box WatUR comes in a close-fitting case. I have three colors of hand cut and sewn from outdoor upholstery fabric (canvas) and a floating version laser cut from nylon. The components of the game have their own purses that close with snaps or elastic that match the dice and stones inside. You can play this game outside and the parts won't blow away. You can take it to a café without worrying that somebody will splash it with a latté because everything is completely washable. While the game is technically dishwasher safe it would be better to just wash everything by hand and dry it with a towel rather than risk losing parts in the bottom of the dishwasher.

The designs on the translucent fiber-epoxy board are etched copper, raised above the surface. The whole thing is protected with a polymer coating. The boards are extremely strong and waterproof. They can cup a little bit so I've added 4 very thin polyurethane bumpers to the corners of the board to stabilize it. I still prefer to play on a tablecloth or towel so the dice aren't so loud.

WatUR snap cases and purses come in four colors of fabric, green, camel, dark brown, and black. Green is the prettiest. I made the most of that color. But since this is meant to be taken out of the house I thought some people might like it to coordinate with their favorite accessories. 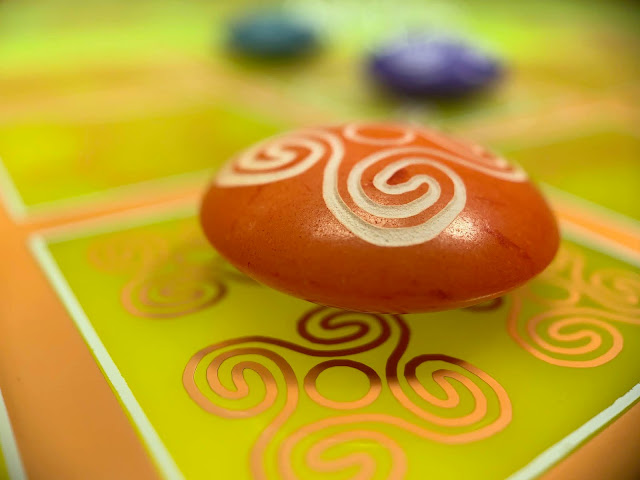 The stones and dice for the versions in snapcases are hand dyed to simulate semi-precious stones common in Sumerian art. The pieces are laser engraved after dying and hand polished. Surface cracks, uneven dye, and varying width of the engraved line is intentional. I was trying to more accurately resemble a natural object, handmade and ancient. These are not a failure of quality control. I hand select the pieces for each set so they look nice together. The presURver contains black and white stones plus a third dyed color for the Three PlayUR expansion.

The orientation of the stones, marked side up or down, is useful in game play. The original Royal Game of Ur had stones that were flat enough to be stacked. These can't be stacked. But they do spin quite nicely, like water swirling off a paddle. The original also had tetrahedral dice (D4s) with binary markings. I recreated binary dice with six sided dice by engraving three sides with a swirl. The tetrahedrons are difficult to pick up and are terrible if you step on one. It's also problematic to have to hand the dice back and forth. That's why this WatUR set comes with a set of dice for each set of stones. 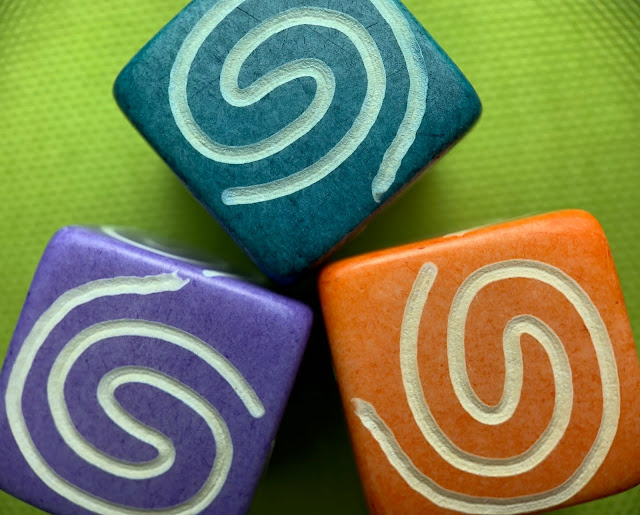 
A similar compliment of parts is found in the PresURver, the floating version of WatUR, but all the cases are stiffened with closed cell foam.

I've written rules for two players and two different routes around the board, plus rules for WatUR Diš, a solo version where you play against Enki, the God of Water, by applying a set of priorities for moving the stones for the other side.