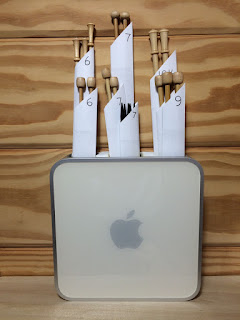 My media computer broke last Friday. It was a 2007 era Mac Mini core2 duo with 4 GB of memory. It worked great to play video on my TV. Then in the middle of playing Stargate SG1 from an external hard drive it just went off. No power. Rats. A while ago my brother asked me what he should do with the old Mac Mini his kids used when they were little. I said to give it to me next time he came to visit. I emailed him to see if he still had it. He did. He said he'd mail it to me. It arrived yesterday. I tested my mini with his power supply, just in case. No luck. Apparently not the power supply. I took both computers apart and cleaned out a disturbing amount of dust. I reseated the connector of the wireless card that came loose in shipping and tested it on my TV again. I'm all set to knit in bed while I watch movies and TV shows from my hard drive. I tried everything I could think of to fix the broken one. I ended up taking it completely apart, setting aside the hard drive and bagging up the electronics.
Now what to do with the good looking case? It would be a cute purse, but it's a little heavy. I decided to make a knitting needle holder. Would also work for kitchen utensils. Here's how I did it:

First disassemble the bottom plate of the computer all the way down to plastic. To get the connectors off the back panel pry the shielding back and pull on it really hard until the plastic dots fly off. Wear glasses.

Next get out a Dremel tool and a cutting wheel. I do this stuff outside because I don't like the mess and burned plastic smell in my lab.

There are little metal tabs backing up the plastic between the connectors. I just cut the plastic and left the tabs. Then in the cleaning-up step I cut off all the small ones. I left the big piece of metal surround from the video connector so they can be part of the dividers I'm going to add. Clean up the cut with the flat side of the Dremel cut off wheel. Be sure to wear safety glasses. My whole bit flew out of the chuck and bounced off my hat. It didn't break the wheel though, so I picked it up off the ground, tightened it back in the chuck, and finished the job.

Then I brought it inside and washed off all the plastic dust. I finished smoothing all the edges with a foam nail file.

I have some closed cell foam scraps left over from redoing the roof vents in my lab so I used that to trim out the inside of the enclosure. One of those gardening knee pads might be a good source for foam if you don't have a stash.

I cut some dividers 1 7/8" wide (by trial and error. Too small doesn't work.) They are long enough to stick out the opening. I cut more rectangles to go between the bottom end of the divider to hold them in the right spacing and to give the needle tips some nice foam to rest on. Then I pushed the bottom onto the top. Line up the metal tabs left behind with the foam so they push into it.

I cut the extra off with scissors. Then I poked the edges down into the enclosure.
It works with my 8 1/2" straight needles. 6" DPNs are a little too short for it.
I decided I liked the Mini for my loose needles. I got those long aluminum needles for doing tubular cast ons. I don't use them that much. They are so long they tended to tip over the lucite cup I was keeping them in. This is better.