How to Dye Melamine Go Stones

I had an idea for another expansion for my board game — WatUR for three players. If I add four squares at one end and two on the other a third player could play straight down the center column while players one and two play the regular C shaped routes.

But Go stones only come in black and white. A third player is going to need a third color. Mesopotamians were heavily into lapis lazuli, so blue is the obvious choice for the third color. Koplow makes blank blue dice, so I could make those easy enough. I just need to figure out how to make white Go stones blue. To the internet!

The Go stones I like are made of melamine. Wikipedia gives a good specific description of melamine. It appears to be just nitrogen and hydrogen. Whereas, also according to Wikipedia, nylon is a general term for a polymer made from mixing two liquids together. The structural elements are nitrogen, hydrogen, carbon and oxygen. Polyester seems to be missing the nitrogen. It's just hydrogen, oxygen, and carbon. I'm not sure what that means for getting the melamine to bond with a dye.

I know that the thermoplastic polymers absolutely cannot be dyed. Polypropylene and olefin fabrics are in this category. If the pigment is not in the vat when it is molten plastic it's never going to happen. (This makes those fabrics extremely stain resistant, as you can imagine.) So I thought I'd compare that molecule with what I've got. I'm no chemist, but it doesn't look remotely the same to me. I think I've got a chance. 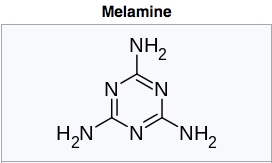 I searched online for who sells the Rit Dye More — all the major craft chains and Walmart, but not Target. I went to town and bought a bottle. I had a coupon and got it for under $3.

The dye instructions for fabric require you to keep the dye bath almost boiling the whole time. This sounds totally reasonable to me. They use melamine to make cooking spoons. It will be fine. I wanted to give the dye the best possible chance of working so I decided to scour the stones first. I combined washing soda and water in my dye pot and brought it to a boil. I put in 70 white Go stones and stirred it for several minutes at a simmer.

I poured off some of the water and then dumped the stones and the last of the washing soda water into a bowl to stay hot.

I wiped out the pot and added distilled water a few inches deep. I set my hot plate on high to bring the water to a boil. When it was boiling I added half the bottle of dye.
I didn't add the dish soap that the Rit instructions called for. I thought the washing soda on the stones would serve the same purpose. If I do it again I may use some dish soap just to see if it makes a difference. I think I'll still scour the stones with washing soda though.

After mixing the dye well I drained the washing soda out of the hot stones and added them to the pot, still wet. I commenced stirring on medium heat with a wooden spoon. I stirred constantly for about 30 minutes. I entertained myself by dipping other random stuff in there, like polyester ribbon, the lid to the plastic container the Go stones came in, and a nylon cable tie. The cable tie died the best. That's almost instantaneous.
I used a stainless steel skimmer to get the stones out of the dye bath. I spread them out on some cardboard to cool.

I cleaned up the rest of the work area while the stones cooled. Then I took them to the sink to wash them. I started with a dishpan of cool water and some dish soap and swished them around good. I was happy to see the water didn't turn too terribly blue.

It only took two rinses for the water to stay clear.

I dried the stones with paper towels, rubbing each one to be sure it wasn't going to bleed.

I'm really pleased with how these turned out. I like the ones that have swirls and color variations. Some of them are just evenly blue. I can pick out sets that go together.

The next step is to mail these to California for laser engraving. I can't wait to see if the engraved line shows up in a contrasting white color. The line on the white ones is sort of brownish, but if you scrub each one with a toothbrush and soap it goes white. I'm afraid if I did that to the dyed stones I'd take some of the color off. But I will definitely test it. It would be easier to scrub each stone than to press caulk into the engraving and wipe it off.

Here's how they look plain on a wooden board.


**Update**
I tried it with orange too, to make stones that look like carnelian. I like it.

This is the idea behind it, lapis and carnelian jewelry from the time frame of the original Royal Game of Ur. 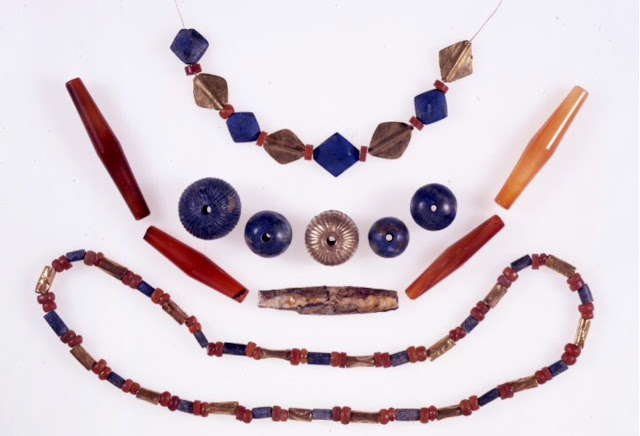