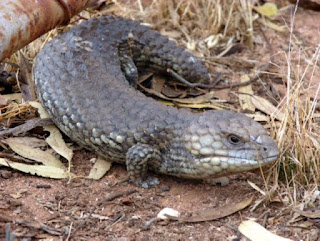 My second Australian reptile pattern is a bobtail skink. This is Ashleigh Wolfe's second study animal. (See Perth's Urban Reptile Ecology for more info) Ashleigh tells me these slow moving reptiles are the Australian equivalent of the tortoises that live in my yard, basking in the sun and observing the world going by without really getting up to much. People in Perth love them.

But tortoises do not lend themselves to knitting. Bobtails are begging to be imagined in bulky yarn. Here's a video of a large number of Bobtails taken from a property to be released back into the wild.
I had the perfect yarn in my stash, Hometown USA Little Rock Granite. It calls for a 9 mm needle, US size 13, and is rated as a 6 Super Bulky Yarn. If anybody finds an Australian equivalent let me know so I can update the blog and pattern.

I also tried an albino version in Los Angeles Tan and an orange striped one in Portsmouth Pumpkin.

This toy is actually cuter in the hand than in photos. The body is just stockinette knit back and forth the same as the snake patterns. It's kind of resiliently squishy but also bendy, and it stays where you put it if you want to give it a pose.

This is a fast knitting project that only takes a few hours and half a skein of yarn. It does take double pointed needles though. The body starts out knit like icord and the head is worked in the round. It has a fleece pillow inside like the snake scarves. I tried many ways of doing the legs. The real ones have such tiny legs. I couldn't really make them come out that small in this same yarn. So I just allowed for them to be bigger. I made them like icord then finished the toes with a crochet hook. It was hard to describe in words how to do it so I decided to do a video of the whole thing. Since the whole project can be completed so quickly I didn't split the video into parts.