I just realized I'm following up all these posts on snakes with a scarf with the initials SSSSS. I may be in a rut.

I posted a 9 page PDF to Ravelry with full details of this pattern. Buy Now for $5! The PDF includes still photos for the slip knot cast on, a full chart of the exact row count for the scarf pictured above, and formulas written out to duplicate the spreadsheet linked below. Also there is a scarf length comparison chart to help choose how long to make your scarf.

This is my promised follow up to my circular seed stitch scarf post where I suggested seed stitch in the round as a good way to practice combination knitting. There are pictures in that blog for how to read the stitches for seed stitch knit in the round. When I finished the black, sage, and gray scarf I was disappointed in the stretchiness of the edges. I wanted it to be evenly stretchy all over, with the edges just as stretchy as the middle. I made up my mind I was going to make that happen. I finally found a way to make a cast on that was just as stretchy as seed stitch — the slip knot cast on. There aren't many videos for how to do it. The one with hand motions I could actually copy was such terrible quality I made my own.

The first seed stitch steeked strip scarf I made, the black and gray one, came out 104" long. I gave it to The Black Knight who is a big fella and he loves that it is long enough to double over and pull the ends through the loop and have the ends still come to his waist. For a small person like me that's way too much scarf. I wanted about 72". Based on the long one I figured I needed 220 stitches to get that.

Well, it only came out to be 54" long. Same needles, same yarn. I guess I was just so uptight about current events I knit much tighter than normal! As such my scarf came out shorter than I meant for it to be. I don't know what number of stitches to suggest. I did a gauge swatch and did the calculations and I was just wrong.

So if you try this scarf do your own gauge swatch with the yarn you want to use and be prepared for surprises. I'm not sure I even want to encourage other people to make this scarf as it is so unpredictable. But just in case I thought I'd try something. I made a quick calculator in Google Sheets. Click this screenshot to go to it. Copy and paste it into your own Sheets Account. I thought about making it editable but that's too risky. A bot could get in there and fill every cell with obscenities. Or worse, mess with my formulas so you get the wrong answer. I think this method is the best I can do without learning how to embed Javascript into Blogger. So copy and paste it into a new spreadsheet. Then you can change the stitches and inches of your gauge swatch and the length of your desired scarf and it will calculate your gauge and the number of stitches you need to cast on to get that length, the Golden Numbers. I even found the function to make it automatically round to an even number. I also already added back the 16 inches for the fringe, or whatever number you type in that cell. 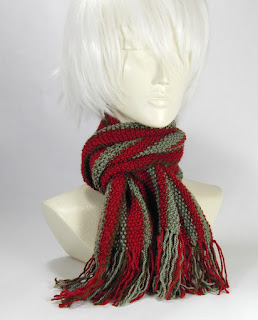 At 3.2 stitches per inch I got 5 inches of fringe on each end. At tighter gauge the fringe came out shorter. To predict your results you'll have to unravel the gauge swatch 8 stitches and measure. If it looks too short add stitches to the cast on and leave more than 16 stitches to unravel in the steeked section. This is a good time to figure out how much yarn you will need to cut to sew the graft. I started mine with 144 inches. This yarn doesn't twist up so it worked. Some other yarns it might be a lot more frustrating to sew with a length like that. I actually ran out about 12" short. It might be best to plan to work in another length of yarn part way through. I used a sewn join for this 100% acrylic yarn, meaning I placed the ends overlapping about 1/2" and sewed it together with needle and thread. It's the only join I had to do in the whole project. I shot video of it but then forgot to add it to the edit. If you have wool yarn then a spit splice would be great. Because the graft is not the very edge it won't be as noticeable as if you had to a yarn join in a traditional bind off.

OK, so that's the cast on and the number of stitches out of the way. On to the grafting. I figured out the secret to grafting seed stitch if one side is a slip knot cast on. (I'm not sure I know how to do it if there are two sides of seed stitch. I think it will just never work in that instance because the graft will come out in between the columns. That's a test for another day.)

I managed to get the explanation of the graft worked out in the video when I was in the middle of the graft. Then I came back to the camera for the end and I went into opposite land and start purling when I'm saying to knit and knitting when I'm saying to purl. I think my brain is defective. My muscle memory will take no verbal cues. Let's see if I can describe it in words. I think 99 out of 100 people would rather watch the video, but who knows? There could be some kind of disaster where YouTube stops working but miraculously Blogger still functions and somebody's life could depend on being able work a seed stitch graft with nothing to go on but my blog. I am a big damn hero. 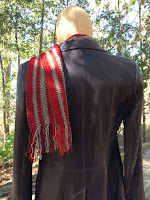 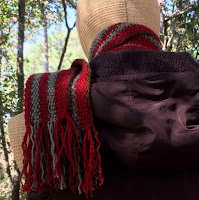 When I started this scarf it was summer. I thought, "Oh, this brown yarn will be just enough to make this coordinate with all my brown clothes." Then when I finished it I got out those brown clothes and it's not even CLOSE to the same color brown. I didn't even know brown was so hard to match! I'll probably wear it anyway. I knew that was a gross shade of brown. I'm kicking myself.

Don't make my mistake. Hold your yarn up to your coat before you start! It doesn't match my brown hooded nylon vest either. I got this yarn on clearance a while ago and most of the good colors are gone. This red is still available but not the other colors. It is more of a formula than a yarn-specific pattern though. I am hoping somebody will commission one of superwash merino based on the sample in acrylic. Maybe some other obsessive compulsive knitter will try it in some pretty yarn and post photos on Ravelry. I hope!


I just this minute realized I knit this on size 4 needles because "4-4,5" is written on the ball band. But nothing else on there is in US units. It's even a decimal comma, as if I needed more of a clue it's not US units. It's millimeters, not needle size. I feel much shame. Although the other reason I used a size 4 needle could be that I bought a size 4 needle for these cables for another project but I don't have a size 7. Oh well. I like it dense like that. It's so springy. But if I'd used 6 needles it would have been a lot easier to knit and longer. A commenter on Webs says it feels like DK weight to them, not worsted, so maybe that's why I went with the small needle. Point is, whatever yarn and needle combination you use is fine. If you want it as stretchy and dense as the one in the video go for smaller needles than called for. This helps it stand up on the neck I think.


The needles I used for this scarf are Nova Platina interchangeables. I got them used on eBay. I like them for scarves better than the Addi Lace Short needles I use for hats. The join is smoother and they come in larger and smaller sizes. I've gotten extra cables and tips from Jimmy Beans Wool. The Addi Lace needles allow you to pull through different cable lengths for trying things on. These don't do that.

I cast on with a size 8 needle then switched down to a size 4 to knit the first row. You have to experiment on your gauge swatch to be sure the needles you choose will make a sufficiently stretchy edge. I think the perfect match of my edges is partly a function of the too-small needle thing. If there were more yarn in every stitch there's more chance the edges would stop stretching before the body.

Thank you for bearing with me for this long explanation. If you want to encourage me to do more of this buy the PDF on Ravelry.