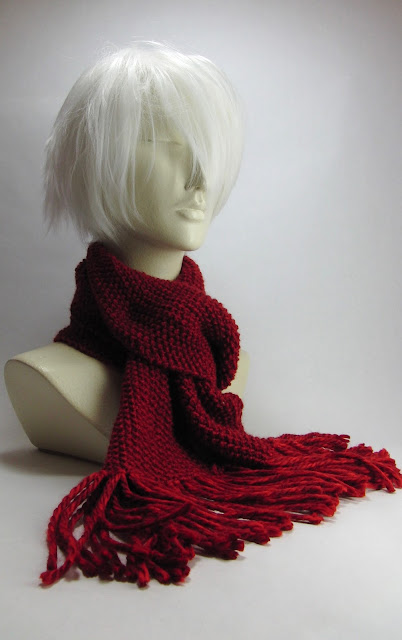 How about another scarf similar to the last one, but this one is easy? No 5 page PDF, just this


My mother liked the striped seed stitch scarf I made but she wanted hers to be solid red, longer, and narrower. I had a skein of Lion Brand Heartland Redwood, some 100% baby alpaca in Ruby, and some red mohair. She liked the 100% acrylic. That's the same kind of yarn I used to make the rat snake. I showed her how wide that fabric was if the stockinette wasn't rolled up. She said that looked right. The snake came out about 7' long. That stuff comes in big skeins. I hoped 142 grams/251 yards would make a pretty long scarf. I cast on 27 stitches with my new favorite slip knot cast on and started seed stitch with some 5 mm size 8 aluminum DPNs. This yarn recommends 5.5 mm size 9, but my vintage aluminum DPN collection only goes to 8. Aluminum is best with this 100% acrylic yarn. Bamboo is right out. Sticks to this yarn like velcro. My nickel plated needles work but I prefer a short DPN to a cable needle for a narrow scarf. I use little silicone stoppers on the ends when I knit. I pull the stopper off the empty needle and stick it on the other end of the one in the work when I stop. Keeps everything in place until I pick it up again.

I didn't do anything special for the edges. I just ended both sides with a knit stitch, turned, and started again with a knit stitch. I had to knit from the front and purl from the back in combination knitting but I got the hang of it immediately. 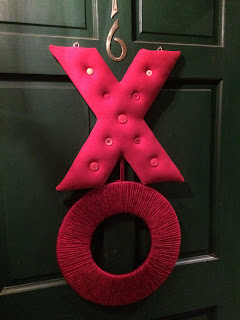 The scarf still on the needles was 54" long and 6 1/2" wide. My mother really wanted it long enough to double it and pull the ends through. I used this same color yarn for the O of a Valentine's door decoration. But it was the Thick and Quick version, not the worsted weight. Still, same color. I had a small amount leftover. It could be fringe. So I simply cast off in pattern instead of doing a grafted slip knot bind off. It will be covered up, no need to make it match the cast on.

I measured a cereal box and snipped and folded one side section to make a 12" place to wrap the yarn. I wrapped the whole length of yarn to be sure I would get 26 wraps (each wrap has two sides). I was about 3/4 of a wrap short. I curled the box over to pull the yarn off, then cut the box more and folded it up another half inch and wrapped it again. I was trying to do it loosely to not stretch it because I thought that would make it uneven. That gave me one piece of fringe extra. Perfect. I cut the yarn at both ends to make my 53 pieces of fringe.

I used a crochet hook to pull the center of each strand under the cast off stitches going between the columns. Then I pulled the ends through the loop, lined them up, and pulled it tight. I failed to take any pictures because I didn't realize it would make a good contrast blog post to the hard-to-make scarf at the time.
After playing with the scarf and trying it on the mannequin the scarf stretched out a lot. It got 10" longer and 1" narrower. That's good for me. I haven't wet blocked it yet because after over 40 days with no rain there's finally a thunderstorm coming. The stretched measurements are: 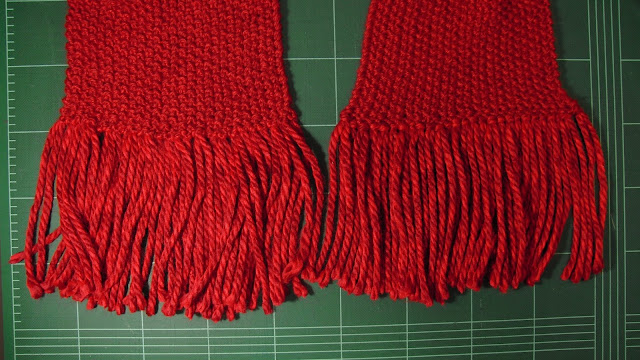 The bulkier yarn makes the ends of the scarf flare out a bit. This turns out to be cute when worn because it doubles over the fringed part like a sophisticated ruffle.

I made up a new pattern for a slouchy hat for a geek teen this week. I started a matching ribbed scarf already, but when I put the red scarf on the mannequin who was already wearing the green hat I remembered red and green are complementary colors. Too bad Christmas ruined that fashion option. I think it looks fetching together. 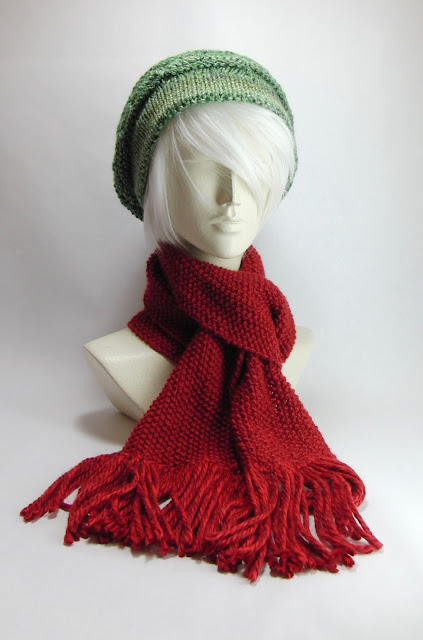 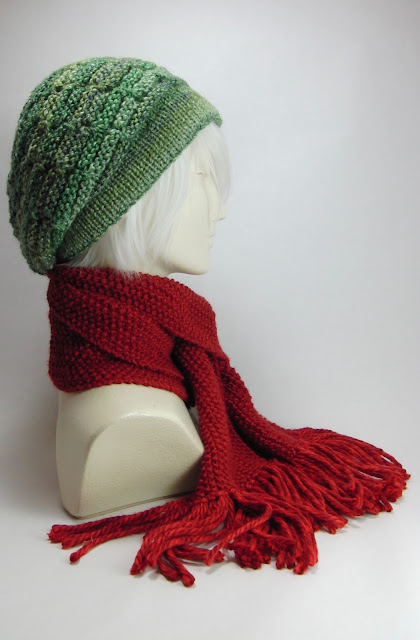