My mother is going to the Women's March on Washington next week and she's demanding a lot of my creativity. I'm making her a banner and a sash and hats specified as the uniform of the movement. The Pussyhat Project has a pattern for a hat knit flat and seamed up the sides. This doesn't really appeal to me. I'd rather do a Kitchener seam across the top for the same result. I have some pima cotton/baby alpaca yarn on hand that I bought on sale in colors nobody in my family likes. But it's perfect for this. I have two 50 gram skeins of each color, fuschia, coral, and candy floss. I have no use for little scraps of this yarn so I'm going to try to use up every inch of it. 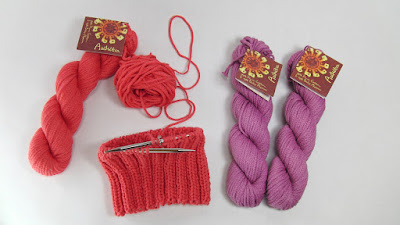 The pattern online calls for a hat that's 100 stitches around. In my hat experience that is way too big for tiny-headed people like me and my mother. I'm going to start with my favorite chunky yarn pattern for baby alpaca hats that has 72 stitches.

I'm using my new favorite stretchy cast on, the slip knot cast on.

I cast on 72 stitches using a size 11 tip.  I switched them out for size 8 tips for the first hat, a very small one. Making sure the stitches were not twisted I started knitting in the round, k2, p2 all the way around. It should end on p2. After one round I took a yarn needle and threaded the tail with it. I inserted it through the first slip knot stitch where the yarn came out. This makes a nice looking join and you can hardly tell. Then I knit 2x2 ribbing until I finished the first 50 grams of yarn. I joined on the second skein of yarn and knit another three rows of ribbing. Total ribbing came to about 5 1/2". It is 6" wide folded in half.

I slipped a longer cable into the stitches to try on the hat. When it seemed like the ribbing folded double would cover my ears I switched to size 9 needles and straight knitting. I kept knitting until the sides met in the middle when I tried on the hat. I actually started to run out of yarn when I was pretty close. I measured that I had 6 arm lengths left, knit around, measured again, and found it took 2 to do a round. So I had enough left for two more rounds. That works out as one to knit, and one for the graft. I knit one more round. Then I knit 18 stitches past the end of round marker, 1/4 of the way around. I moved the other 36 stitches to another cable needle.

Then I did a kitchener close across the top. I used a size 9 DPN to hold the gauge of the graft. It came out a little too loose. For the next one I will go down a needle size for the graft. The final height of the stockinette section is 5". It is 8 1/4" wide folded in half.


I use a needle and thread to secure the ends of this chainette yarn after weaving it in a bit. It's too bulky for knots and I don't trust cotton to stay put.

No side seams, cute little ears. 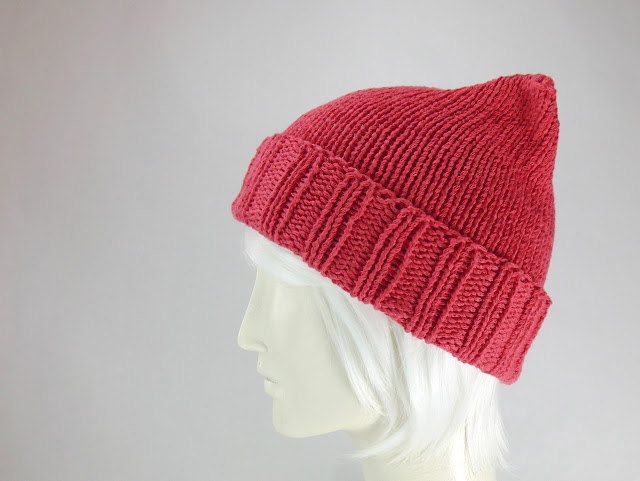 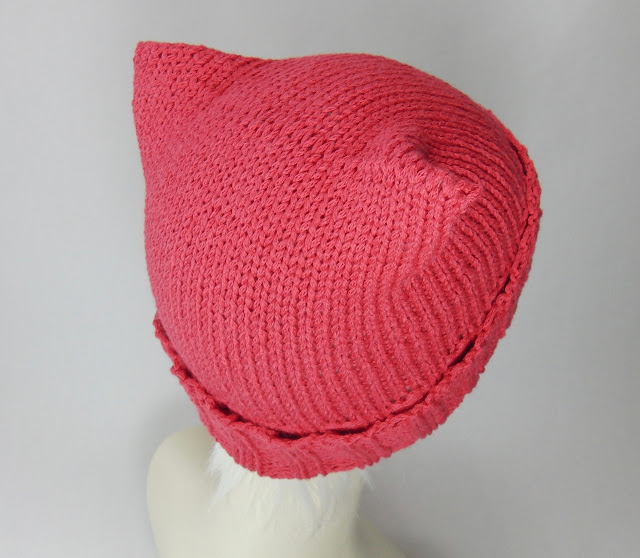 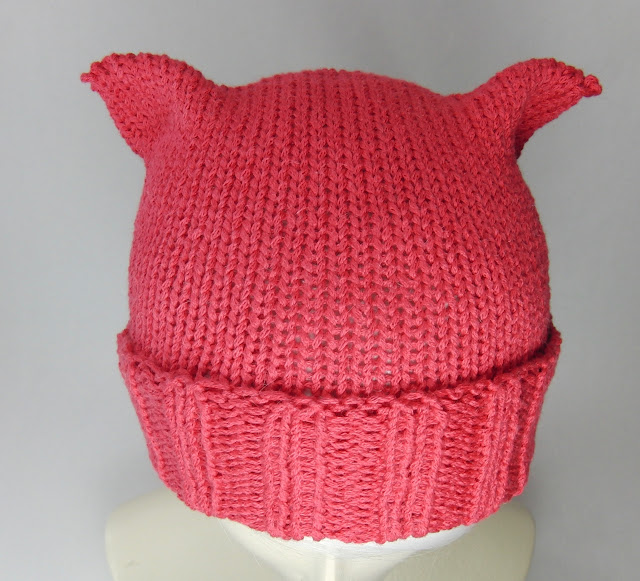 Update: I grafted the top of the coral hat during the spacewalk on Friday, Jan 13. I used a 9 needle for the ribbing and 10 for the stockinette. I like this one better than the tighter knit hot pink. It's only 1/2" bigger but it makes the ears cuter. I also went down 2 needle sizes for my gauge-holding needle for the graft. I used an 8 for size 10 knitting needles. This was good. 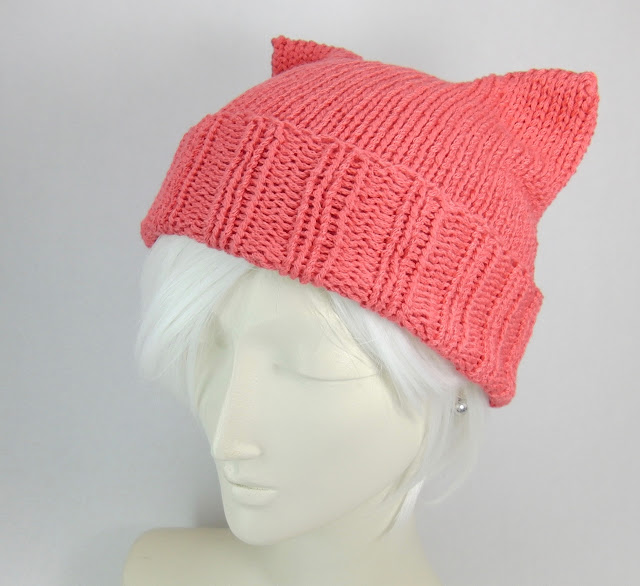 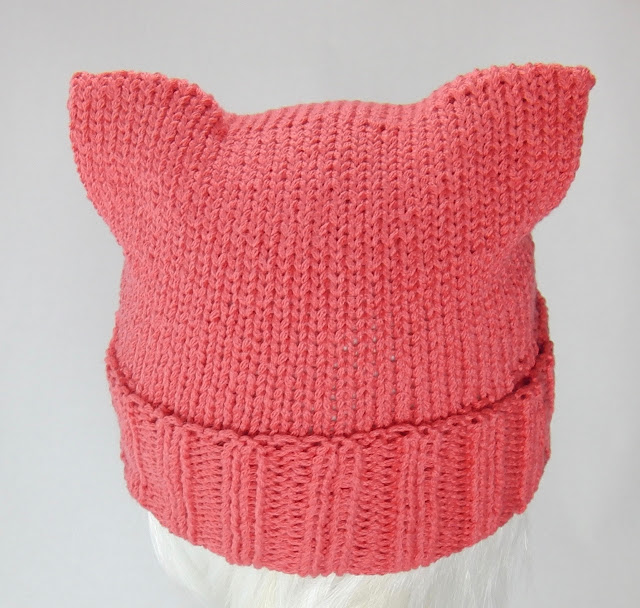 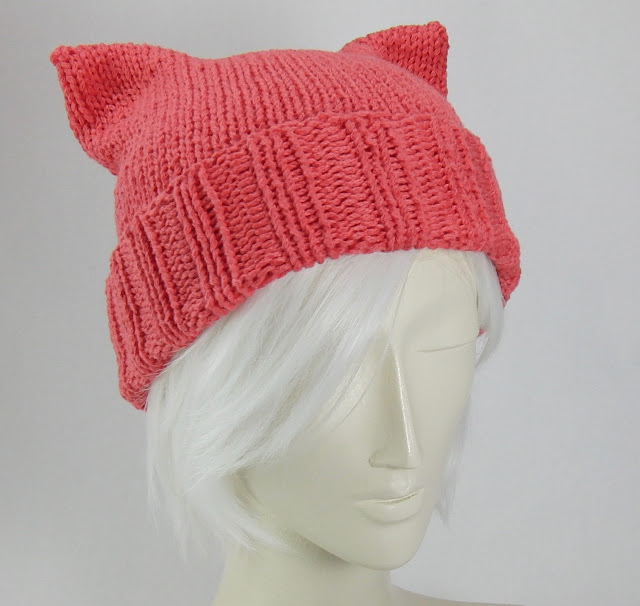 Email ThisBlogThis!Share to TwitterShare to FacebookShare to Pinterest
Labels: asikita, in the round, knit, Pussyhat, yarn