I've been working on a new project all summer. I saw a video in April of Tom Scott and Irving Finkel playing an ancient board game and I became obsessed with it. I loved the dice especially. It uses four dice that represent 0 or 1. You add them up. This appeals to me because I have trouble adding big numbers and I have some relatives with the same genetic deficiency. It's not an impediment to doing higher mathematics or anything, but if you're playing a game for fun it's nice to be able to relax and not have to face your shortcomings whenever the dice come up with too many spots showing.

I decided I could make this game myself. It's 4500 years old, surely it's in the public domain. I got some blank tetrahedral dice like they found in the Royal Tomb in Ur and I modified them for the game. The ones in the museum were carved from bone. I was ready to embrace modern materials though, so I used plastic.

I had some scrap 1x6 pine boards so I cut out the shape of the board. I bought Affinity Designer when  they came out with the upgrade recently so I set out to learn that software and design the decorations for the squares. I studied the original closely.

I don't actually like the original design. It's a lot of variations of the all-seeing eye and it sort of creeps me out. There are a lot of copies of this game and they all just look like this. Why? As long as the designs repeat in the same places it could be anything. Why not be original when you're copying the oldest board game in the world?

I thought the 5 spot squares looked like frog eggs. So I designed Frog Ur as my first version. 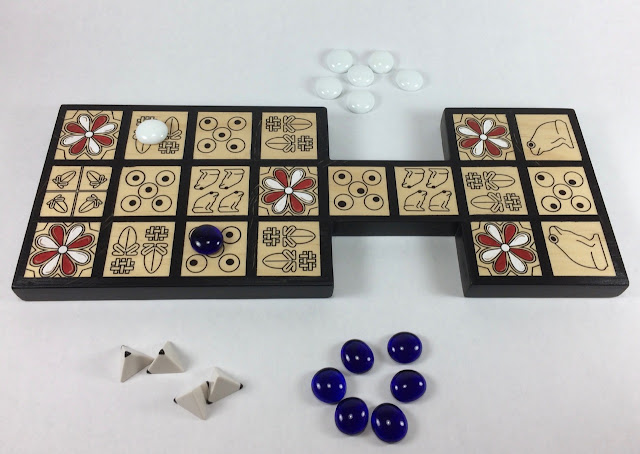 I took this one to the coast and played it with my nieces and their friends on vacation. They liked it a lot. We played it enough to establish an average time it takes to play (25 minutes) and we tested an alternative route for a more complicated game and timed that too (45 minutes to 1 hour 30 minutes). We discussed changes I could make to lead you through that alternate route. They had ideas for other Ur puns, like a boat themed one called SailUR or one with domesticated animals called FarmUR. I wanted to do one of star fish and sand dollars called EchinodURms. There could be a Game of Thrones themes one called WintUR.

I tried several of these but I felt compelled to be true to the 8 pointed rosette theme that ran through all the artifacts I saw on the British Museum website. I finally came across Enki, the god of Water. He was often shown as a mountain goat with a fish body, or he had a river just shooting out of his head with fish jumping in it. That's how I settled on WatUR, with mountain goats, turtles, fish, and sun and stars instead of rosettes.

I made some more of the wood boards with decals and played it with a friend. He complained that the dice were hard to pick up. I didn't mind sliding them off the table, but I wasn't crazy about how hard it is to make them. I'd contacted all the dice makers to see if they could customize these dice to have contrast colored tips and they refused to even try. They were happy to customize dice on the flat faces. So I decided I could solve two problems at once by having 6 sided dice made to only have 2 outcomes. Put spots on 3 sides, leave 3 sides blank. Now the odds are the same as the tetrahedral dice. And it's this probability that makes the game work. The fact that your opponent is more likely to roll a 2 than a 1 or a 3 helps you decide where to put your pieces.


I did some research and found there are prototype board houses in China with no set-up charges and quite a low fee per board. Cost less for fiberglass cut with a CNC router and shipped express from China than it costs me to cut out a piece of wood and sand it, let alone decorate it and hand paint it.

While I was working on my board layout I was also exploring the possibility of doing laser engraving on wood. In the process of getting the vector file to a laser engraver I figured out I could convert my Affinity Designer files to AutoCAD format, good old DXF.

The board layout program can import that. In just a day or so I had my WatUR design rendered as a printed circuit board too. But I can't have 1 and 0 with Sumerian artifacts. They used cuneiform, not Arabic numbers. So I had to find a source for custom dice. It turns out they're just as affordable as the circuit boards. But only if you buy 2000 of them.

After all this work I really really want these custom dice. I got a dozen made one at a time by hand for $3 ea to photograph, but I want the custom molded ones from the UK. I continued working on the rest of the steps to product launch and decided I could buy the dice if I could get 250 people to pay $35 ea for a set. 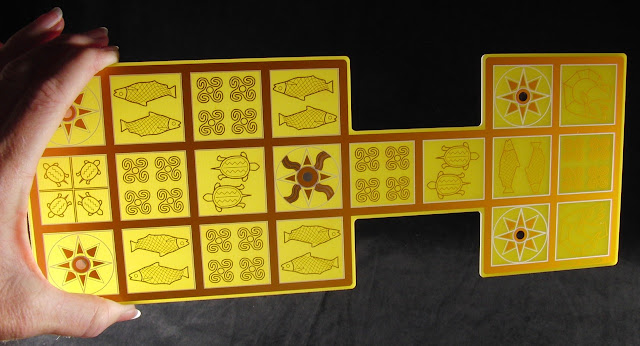 Here's the KickstartUR link! It's not going to make it, but it was fun. I have some ideas. I may try it again later.
Posted by Beachton